Using StackEdit to write a book using Google Drive as a workspace. I’m getting frustrated as the app keeps screwing up the text and garbling it with a mixture of edits. The version history isn’t helpful. I just finished a chapter only to discover StackEdit messed up an earlier portion of the chapter and a previous chapter. I can’t keep wasting time rewriting stuff that the program ruins. The pandoc exporter is also worthless as it inconsistently honors linebreaks, even if I use backlashes. Pro…

I started a document on my laptop which was synced to google drive. Then I worked on the document on my desktop for almost a week. When I pulled it up on my laptop today I seem to have gotten a mixed old and new version. The new stuff I had added on the desktop was there though there seemed to be old stuff at the bottom of the file that I had deleted. Maybe I’m hallucinating thought I don’t think so.


So I use stack edit for something, but sometimes it will try to merge the old and new versions together and will end up putting the wrong things in places. I’ll put an example here when I see one. But it’s pretty bad. I think that it has to do with it trying to merge a new file instead of writing over the old one.
[Album] Stackedit Sync Corruption 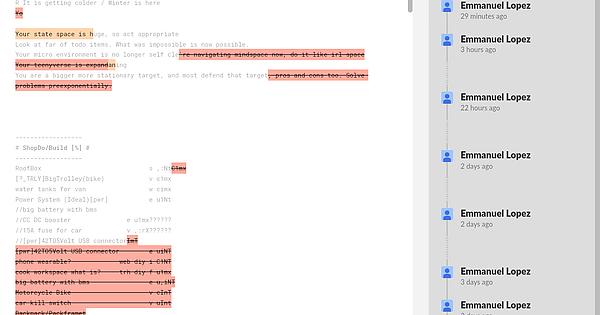 As you can see it screws my text pretty hard.

This happens especially when I make big edits and move text around the document.

Stack edit is nearly worthless, destructive even. I can not continue to use and depend on an editor that insists on mutating my documents. I shall port everything to HackMD. Hopefully they will have this bug fixed, but who knows?